The introduction of the iPod, iPhone, and iPad and the use of Intel-based processors have generated a steep increase in the sales of Macintosh computers, which are no longer restricted to the realm of desktop publishing and computer-aided design.

Computer users are attracted by the design of the Macintosh, its UNIX-like stability, ease-of-use, and its ability to run Microsoft® Windows. Most die-hard Windows users will refuse to return their Mac once they’ve started using it.

This hands-on course makes a departure from the world of Microsoft Windows and provides in depth instruction on analysing the various Macintosh operating system artifacts. The course’s topics will cover:

This course is intended for EnCase users, working as law enforcement officers, corporate and private investigators, computer forensic examiners, and network security personnel. A basic understanding of the concepts of computer forensics is required. The class curriculum continues with the tuition provided in the DFIR-Building an Investigation course, continuing with a focus on conducting examinations of the Macintosh operating systems.

This training will be delivered by highly qualified instructors in the field of Computer Forensics.

Please register your interest for the courses & we will inform you of the next intake.

We will update as soon as the course schedule is confirmed.

Meanwhile, please Register your interest to receive the most updated news:

Regarding Tuition Fees, please contact us to find out more. 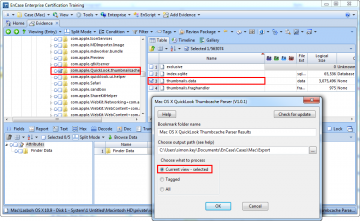